THE FUTURE OF HORTICULTURE 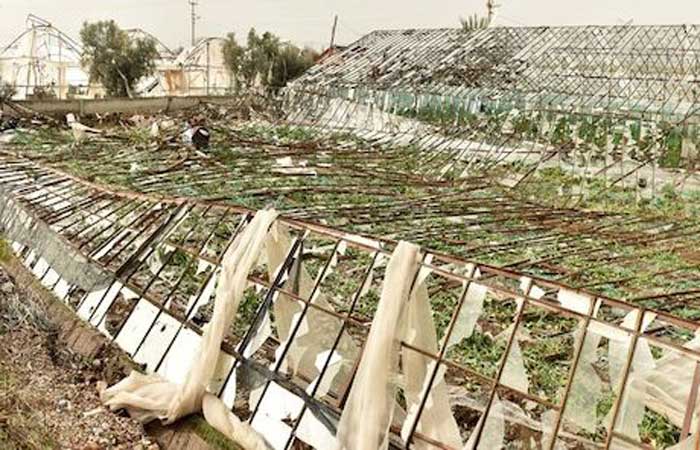 With massive increase in water-energy efficiency

Improvements from 8 to 62-fold for certain vegetables. NetPro green house films and nets are designed with the future of agriculture in mind.

A net house with a misting system uses less water than a greenhouse with a cooling system according to Researchers at the International Centre for Bio saline Agriculture (ICBA) developed a highly efficient low-cost net house technology that can help to make horticulture significantly more feasible and make profitable agri-business in the United Arab Emirates (UAE), while saving water and energy.

The ICBA team completed a long-term evaluation of growing cucumber, tomato, sweet pepper, and other vegetables in a widely-used high-tech greenhouse and a traditional net house designed to cope with UAE conditions. They compared a model of greenhouse with a fan-pad cooling system and a net house model equipped with a misting system and a shade net.

Researchers discovered that greenhouse cooling is the most water-intensive process as it consumed 1.6 times more water than the amount required to irrigate cucumbers. In contrast, the misting system in the net house required about 20% of the water used to irrigate cucumbers. Data also showed that the greenhouse consumed 62 times more energy than the net house.

“Our research demonstrates that the net house can be a low-cost alternative to the common greenhouse. More importantly, this technology can help to considerably reduce energy and water consumption for vegetable production.

A NetPro designed crop protection cover is created to withstand climate pressures such as hail and severe storms.

I'm writing to thank you for your excellent product. We covered our ten year old lychee patch with the Fruit Fly net using steel post/poly pipe tunnels. The result has been extraordinary - the first time we have ever been able to harvest clean, mature fruit from these trees! The feeling under the nets is one of complete peace - protected from all predatory insects and birds. Until now we ate lychees as half-green, tart fruit in order to rescue read more

Prixcar recently engaged Netpro Canopies to install our latest hail netting canopy in Altona Victoria. Netpro installed one of their Flat UB3 canopies which is performing very well. We found the team at Netpro to be extremely professional and obliging, they worked in well with our operations and endeavoured to make sure all our requirements were met.

In 2017 I moved from Toowoomba to Geham north of Toowoomba. I set up a temporary shade house for my Clivia collection. During the Winter I had a negative 7°C morning and as a result I lost over 250 plants. I called NetPro in Stanthorpe and spoke to Glenn McRae about options to protect my plants. Glen recommended their Frost Cloth Spun-bonded Polypropylene ("fleece") White, 30gsm (grams per square metre). This year I had a negative 6.5°C and under the read more

In 2003, Golden Valley Orchards were offered the opportunity to work with the NCEA (National Centre for Engineering in Agriculture) and NetPro Pty Ltd on a research project evaluating the effectiveness of (among others) NetPro's dam-covers. Renato says of his first impressions of the idea: "Evaporation is a pretty big problem - I thought it was definitely a good idea. The only problem was the expense: the cover cost two hundred thousand but we received a subsidy of eighty thousand." read more

I had the pleasure of dealing with Justin, Michael and the Netpro team during construction of a new facility for Autonexus, in Eagle Farm Queensland. The requirement was for 30,000m2 of hail net installed over two stages. From the very early design and negations to contract management, installation and importantly post construction the staff and contractors were at all times professional and responsive to the specific site challenges that we faced. The project was completed on time, defect period commitments read more