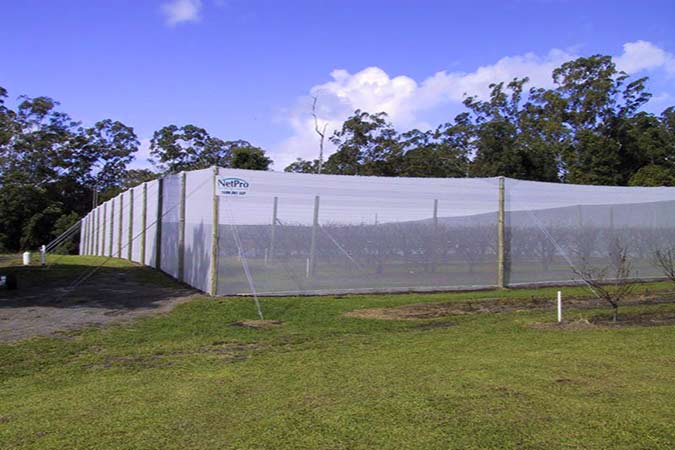 NetPro, started more than 25 years ago with hail and bird netting. During which the company researched and created insect netting for green houses and broad acre farming.

The first generation of netting was designed to directly Cover Vegetables in an open field, with products such as Grow Shield, Vege Net and Horticultural Fleece. These products allow a micro climate to protect seedlings and also to allow plants to withstand frost. Transitioning from horticultural fleece to Vege net, throughout the growing season, allows plants to be protected from flying, hopping and crawling insects.

The interest in netting has increased as more farmers move to organic certification. Biological farming is getting more and more popular, and insect netting is the biological solution to controlling insects. The consequence of readily available selective insect killers has led to insect population imbalances, where some insects are flourishing in the absence of their predators.

In temperate regions, climate change has led to the proliferation of some species of insects where warming has improved conditions. Pressure from some insects is increasing. If the Temperature in those regions Increases a fraction the insects grow faster. This isn’t happening in the tropics because those regions are often too hot for optimal life cycles.

Horticulture and NetPro Nets and Screens

Farmers must adapt to farming methods including crop rotations and rather than use pesticides, screens and net are becoming more viable an option for broad acre farming.

Our Insect Screen keeps out Thrips and Flea beetles, it is available in 100m rolls 3.5 metres wide.

Fruit fly exclusion net, excludes larger creatures that sting to lay their eggs and behaves as a Bird deterrent as a bonus.

For further information please give Debbie a call on 07 4681 6624 or email debbie@netprocanopies.com

I'm writing to thank you for your excellent product. We covered our ten year old lychee patch with the Fruit Fly net using steel post/poly pipe tunnels. The result has been extraordinary - the first time we have ever been able to harvest clean, mature fruit from these trees! The feeling under the nets is one of complete peace - protected from all predatory insects and birds. Until now we ate lychees as half-green, tart fruit in order to rescue read more

In 2017 I moved from Toowoomba to Geham north of Toowoomba. I set up a temporary shade house for my Clivia collection. During the Winter I had a negative 7°C morning and as a result I lost over 250 plants. I called NetPro in Stanthorpe and spoke to Glenn McRae about options to protect my plants. Glen recommended their Frost Cloth Spun-bonded Polypropylene ("fleece") White, 30gsm (grams per square metre). This year I had a negative 6.5°C and under the read more

As major investors in the Australian horticulture industry, Rewards Group Ltd needs to ensure maximized returns on all funds invested, particularly in orchard infrastructure. Accordingly, our choice of contractors is critical to the final success of any project. At Rewards we recognise that NetPro Pty Ltd is clearly the industry leader when it comes to protective canopies. They have the best quality product, and a reputation to match. Rewards Group is now a major client of Netpro, having recently covered read more

I can't believe it's been over 9 years since Netpro installed the first Hail canopy at our facility here at the Port of Brisbane. With this in mind, I would like to take this opportunity to thank yourself and your company for your continued support and services provided. We have been extremely please with the overall performance of the canopies and also thankful for the lack of general maintenance required on the canopies. We look forward to working with you read more

We liked the product NetPro offered, quality was our main criteria. The option of wooden posts was an important feature because of the highly-corrosive conditions in the feedlot environment. We were able to work through the construction plan and the materials options during the quoting process. After construction was completed, we had a couple of small issues, which NetPro worked through with us – the backup service was very good, and we are really happy with the result. The most read more

I had the pleasure of dealing with Justin, Michael and the Netpro team during construction of a new facility for Autonexus, in Eagle Farm Queensland. The requirement was for 30,000m2 of hail net installed over two stages. From the very early design and negations to contract management, installation and importantly post construction the staff and contractors were at all times professional and responsive to the specific site challenges that we faced. The project was completed on time, defect period commitments read more

Prixcar recently engaged Netpro Canopies to install our latest hail netting canopy in Altona Victoria. Netpro installed one of their Flat UB3 canopies which is performing very well. We found the team at Netpro to be extremely professional and obliging, they worked in well with our operations and endeavoured to make sure all our requirements were met.